GENERATING GROUP PRIORITIES ON A TOPIC (MATRIX RANKING AND SCORING) 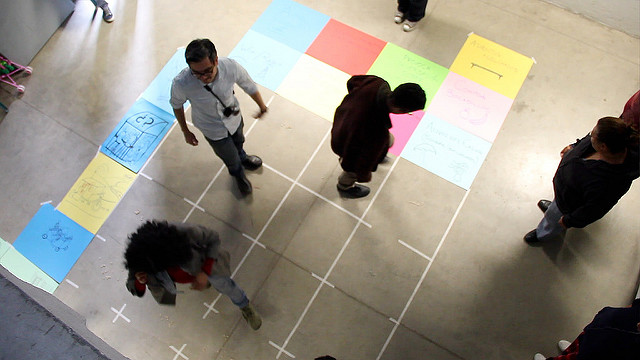 This 1-2 hour activity shows participants how they can discover different perceptions about advantages and disadvantages of a particular issue amongst different groups. The result is a scored and/or ranked list of criteria or qualities about some topic of interest.

Ghana ThinkTank is an international collective that “develops the first world” by flipping traditional power dynamics, allowing the “third world” to intervene into the lives of the people living in the so-called “developed” world. We collect problems from communities throughout the USA and Europe, and send them to think tanks we created in “developing” communities. The think tanks – which include a group of bike mechanics in Ghana, a rural radio station in El Salvador, Sudanese refugees seeking asylum in Israel, an artist collective in Iran, and a group of incarcerated girls in the Boston penal system, among others – propose solutions, which are then implemented in the “first world”.

Ghana ThinkTank’s innovative approach to public art reveals blind spots between otherwise disconnected cultures, challenges assumptions about who is “needy,” and turns the idea of expertise on its head by asking people in the “third world” to solve problems of people in the “first world.” This process helps people overcome their own stereotypes while being exposed to the stereotypes that other cultures have about them. Ghana ThinkTank was founded in 2006 by Christopher Robbins, John Ewing and Matey Odonkor. Maria Del Carmen Montoya joined in 2009. The project began with think tanks in Ghana, Cuba, and El Salvador, and has since expanded to include Mexico, Iran, Serbia, Indonesia, Sudan and Morocco. http://www.ghanathinktank.org/