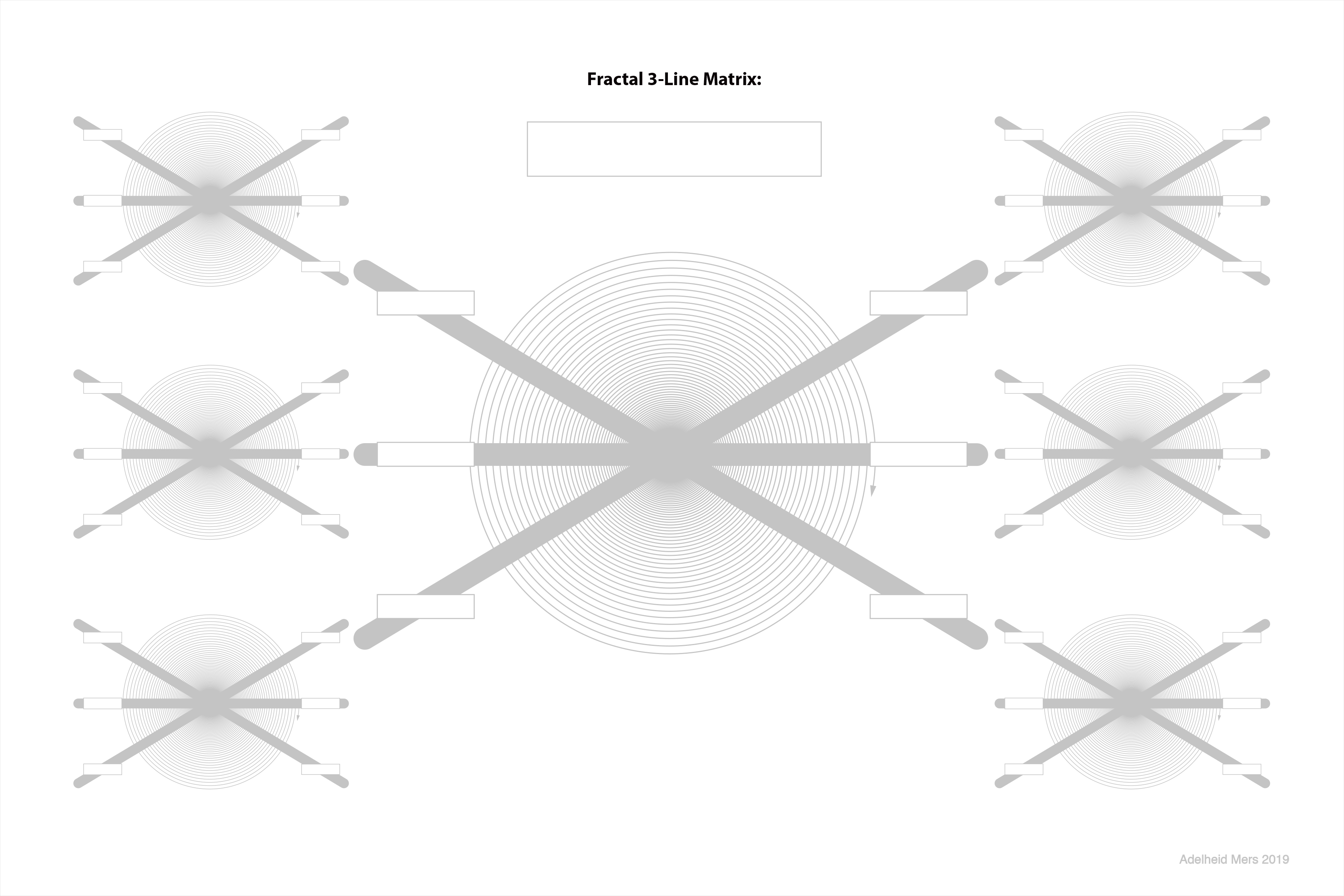 Triadic relation: The Matrix centrally contains 3 main, intersecting axes. Each axis is to be designated with one of three main themes a reader determines a text to contain. The axes intersect to avoid ordering them hierarchically, as a list, an added benefit of which will be apparent in the fourth step.

Binary relation: The ends of each axis are named with a term that designates the axis themes’ boundaries. These outliers can be any binaries termed significant. They do not need to be opposites.

Fractal relation: In a fractal movement that repeats the steps above, the six outliers of the three axes may each be outfitted with their own matrices, and so on.

Symmetric relation: Finally, the contraption is set in motion. Spinning or flipping the axes around their center, the relations among the outliers and their fractals can be varied, promoting new readings of the material, horizontally across the field, or along the vertical ‘stacks’ forming left and right.

Performative Diagrammatics, functions as a mobile laboratory: a place to work things out. Audiences are invited to participate in facilitated workshops, using and altering pre-made tools to model own ways of making sense, including connections between civic and cultural concepts, and embodied values. Tools range from verbal prompts to pre-printed diagrams on whiteboards, fabricated objects, and live streaming, custom-coded 360° video. This work develops by carefully observing how lay and professional cultural producers animate the systems through which they operate; and by creating tools collaboratively, with volunteers and other contributors, who share experiences and ways of knowing.

Adelheid Mers engages in conversations with lay and professional cultural producers about their aesthetic practices. She uses diagrams as tools for figuring, to make cultural ecologies accessible to reflection, with an emphasis on practitioner perspectives. As a tenured professor of arts administration and policy at The School of the Art Institute of Chicago, Mers appraises cultural processes across scales and manifold participant's interests. As a visual artist, she draws on the performative tools of studio critique to facilitate conversations. Formally, diagrams are defined by their operativity, engendering action and reflection. Mers' diagrams are deployed across media, ranging from quick sketches to freely distributed flyers to manipulable whiteboards; occasions are created for use and response.

Mers works independently, with artists, and with non-profits and their constituencies. She has explored artist's thinking about grant application processes for the 3Arts Foundation, and conducted research on cultural ecologies on Chicago's south and west sides, with the Foundation for Homan Square and the University of Chicago. As part of an ongoing project, Art Work (Visual Art/Music/Management) Mers is currently exploring the practices of sound artists, composers and experimental musicians, in collaboration with colleagues at the Institute of Cultural Management at the University of Music and Performing Arts, Vienna. Her work is presented nationally and internationally, through conference contributions and exhibitions. She has curated thematic exhibitions, published essays on pedagogy, arts administration and art-based research and has edited and published a book, Useful Pictures.

Honors include grants from the German Academic Exchange Service (DAAD), the British Council, the NEA, Illinois Arts Council and DCASE. Mers serves on editorial boards, and has recently served as juror for the NEA and the Rauschenberg Foundation.

Mers works with artists and with non-profit clients: with the City of Chicago Mayor's office and department of Innovation and Technology she observed stimulus funding application and uses. She has worked with the Evanston Art Center seeking out local arts ecologies, explored grant making impacts on artists for the 3Arts Foundation and conducted projects on Chicago's south and west sides, with the Foundation for Homan Square and the University of Chicago. Her work is presented nationally and internationally, at conferences and exhibitions. She has curated several exhibitions, published essays on pedagogy, arts administration and art-based research and has edited and published a book, Useful Pictures. Honors include grants from the German Academic Exchange Service, the British Council, NEA, the Illinois Arts Council and DCASE.